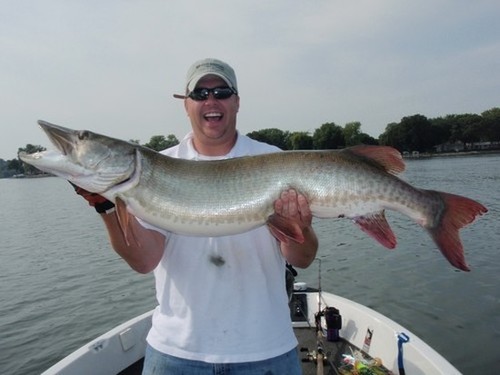 As the sun broke above the horizon, our expectations were high. We already had one 47” Lake Minnetonka muskie photographed and released. Unfortunately, a fleet of muskie anglers were attacking the deep weed lines and the muskie action waned. Boat after boat casted a rainbow of baits shallow and retrieved them into the deeper water. Looking around Lake Minnetonka, most of the large weed flats were receiving the same treatment.

As a Lake Minnetonka muskie guide of 26 years, I have seen this scenario play out a thousand times. Muskie guiding in the metro area can be a real challenge. None-the-less, I am paid to produce under any circumstances.

My clients thought the action was over for the day. I had a trick up my sleeve, however. We ended the morning trip with two more photo opportunities! We were throwing the same baits in the same areas as the other boats but with an important twist…

On a late season guide trip last year, we were fishing a shallow water bite that had been producing earlier in the week. Today, we were seeing several fish but were having trouble getting them to bite. We again used my little trick to put a couple of fish into the net. This father and son duo had never caught a muskie before, now they posed with two! The first one was a 54 ½ incher, the second was 43 inches. What a start to their muskie careers!!

What were we doing differently? We fished inside out! On the deep weed line, we went up on top of the weed bed and cast out into the deep water and retrieved our lures into the shallow thick weeds. We were covering the same water, but we were giving the muskies a completely different look then they were used to.

Fishing inside out works well when you are seeing muskies but they will not bite. It is easy for muskies to track lures in the open deeper water. Bring that same lure into a thick jungle of weeds and the muskies can not track it as easily. There is an opportunity for escape for the bait and the muskies tend to be more aggressive!

This pattern works also works on shallow muskies as well. When everyone else is throwing shallow, go ultra-shallow and cast out. Muskies don’t like to follow baits into ultra-shallow water. As the water gets skinny, muskies tend to slam the lure before they run out of room! Remember, going super shallow requires complete silence or your chance will be gone.

These fish were receiving a lot of pressure from other boats. Much of our success came after we switched tactics and changed our lure direction.

Next time you find yourself on pressured waters or the muskies are following but not biting, change directions on them-FISH INSIDE OUT!!!

0 Comments on Muskies Inside Out